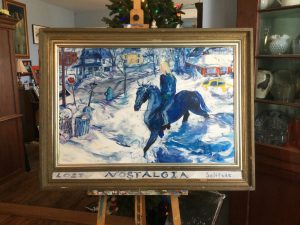 January 1978, THE Blizzard, a recollection from Martha Lindenborg Vaught

I was 16 and wondering from child to adult, and that life, in the 1970’s, was gritty and chaotic. The attitudes that surrounded me, and made our collective 1970’s culture; the attitudes toward people, animals and life were harsh. Survival of the fittest and if you didn’t fit too bad. I did not fit. For reasons too numerous and uninteresting to relate, I was beyond outcast.

Today, 2017, we are returning to that harsh sort of attitude. A scorn for people in need; unwillingness to accept other folk that are not like us. It is to my mind a sad and mistaken sort of nostalgia for times past. They only seem simpler because we were younger. Young and therefore had ‘futures’. “Make America Great Again” I’d warn don’t get in a time machine and go back unless you like truth and honesty.

I do miss from that time, the sense of having a future and that interesting things might happen to me. Like getting away from school altogether. At 16 I was no longer at an age where I could be jailed for not going to school, but I still hated going. Big snows closed schools, and therefore I loved them. Snow days were a ‘get out of jail free card’, for me. Snow covered over trash, the shabby, the mud, it hid the chaos that surrounded me.

I kept a small pony Cherokee at our city home, and would ride her around our yard and neighborhood. We were eccentric and shunned. During the storm with it’s 70 mph winds and ferocious wind chills we brought her into the entry way but as soon as the winds stilled, she went back outside , and I rode her through the drifts. The streets were choked with snow; the winds had sculpted it into fantastic forms. Great ridges 3 to 4 foot high, porches full and doors blocked; roofs looked like dramatically frosted cupcakes.

I loved the silence and sense of isolation that the grinding inhospitable worlds of work and school, were brought to a halt. The snow silences things. The very low temps alter the way sound travels to the ear. I loved the sense that nature was bigger than us and that life would go on not on hostile human terms, but by its’ own device. Brutal at times but snow melts and green things grow. Today I think that sense of Natural Order is gone. Now humans have altered the climate and fouled the natural world, and worse, few in this country seem to care.

Today after the days of the Great Blizzard of ’78 Indiana has snow plows and other machinery to thwart the snow, and we are forced to keep moving at breakneck speed; our many machines need us to work as tirelessly as they do.
This hard Right turn in this (country maybe even the world) is dismaying. There is a sense that decency is gone and all that matters is that the ‘winners’ get to take everything. It is depressing to see the end of progress in governance.
I have faith but no hope.

I recall that time of my life and living/getting through it; I cling, now as I did then, to the transcendent: music; art; conversation; faith; landscape; and weather.

Excerpt from my personal journal THREE days before the Election. I updated have expanded and updated it this morning one week later, to reflect that elections results. MCLVUncategorized 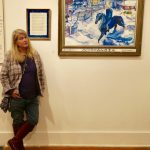