No I am hotter than hell these days with my loss of 40 lbs. and the hope to shed more. I have been very stiff and sore lately and wonder what is up with that? Likely need to trim my nails since I cannot type with finger nails. Contemplating how to deal with the fascism is emerging in this country and wanting to just live in a more civilized place. Now I have nominated a new moniker for the middle of this country the “Basketlands”; since that is where the bulk of the ‘deplorable’ live. I am ready for a brighter life and likely to be shot down. Such is life.

But no sincere Christian can vote for Trump, or really back the alt right direction that the GOP has nursed and grown in to poisonous adulthood. To celebrate our Hoosier Bicentennial, I Want to put up a sign at the entrances to this state that proudly announce. “Welcome to Indiana our Nation’s capital of willful Incuriosity!” Magical thinking abounds. I am Sick and tired of the whining, self-pitying, fearful, bigoted, incurious, anti-intellectual, gun worshipping, citizen peeps that have let talk radio and Fox News poison their minds. These folk work from fear not love. They are not classic conservatives. Conservatives like well established institutions governed by reasoned laws and gradual change. What ‘conservatism the dog whistle’ has warped into is; Fear of any, even good change, and fear of loosing their stuff or having their property values go down. Voting for Trump means interest in winning by any means-selfishness. Hire a vulgar bully to protect stuff and punish those I don’t like. I may hold my nose as I voted, but when the chips are down I am hiding my purse, locking my door and getting a gun. I can stand on my stack of bibles and get off a clear shot when the unwashed brown hoards head up my drive to take my DVR.

And no I like to live well and don’t want to see conservative or liberal folk be thrown into misery. I LOVE lively debate and learn from others. Most citizens are troubled that way too many extremely hard working fellow Americans have been abused and exploited. Intolerance abounds on all sides. The folk I know, from all political stripes, here where I live, are hard workers and often face unreasonable working conditions and not enough pay to have the basics: good housing; higher ed for the offspring; or healthcare that’s affordable. The American worker is the most productive in the world. They just don’t get a fair wage or salary; real income has not increased in 40 years, and in significant ways it has declined. Education and healthcare have become unaffordable and if you think College is expensive try ignorance. We wont be able to thrive if we are not educated; not in this tech saturated world. Plus it is good to learn, and live a full life. Delighting in all aspects of God’s created world. In HIS image as loved creative ensouled beings. Loved forgiven wanted Merciful. Plus and this is important, NOT one of us chose where to be born. I have been fortunate and blessed and loved. Gospel tells me that God loves all, so why do some get born in very poor circumstance? And what is my responsibility? Personally for MCLV it is keeping craft brewers employed and art material merchants-just saying:-) Never good to take one’s self too seriously!

Yeah, I fear for the future of this ‘great experiment’ The United States of America; but I am not sentimental about it, or deluded that the Almighty God of creation has granted us some special status in the blood soaked, rotting corpse strewn, journey,of human history. No civil society persists without honor, tolerance, inclusion , affection for neighbor, civility, these virtues are earned anew, each day; for both the souls of individuals and nations. This planet is now way to small for us to act as humanity has for so damn long.

Everyone loves to catch a glimpse of these Bald Eagles our nation’s symbol that have come back and NOW even in Franklin. But without godless and faith based  liberals like me, there would be no EPA to restore our environment and try to keep us safe from environmental destruction. This bird’s return is a heartening result. Or if the GOP rolls back environmental protections, it may just be a ‘good bye’, this bird’s sightings. Good bye before we go into time where our natural environ collapse turns fully into a dystopian reality/ugly crisis. There are many signs this is happening. Mass extinctions, warmest years in history, dying bees, extreme violent storms, rising sea levels. But hell the sunsets and the sunrises are pretty thanks to all the wild fire and pollution particles floating in our shared atmosphere.

I can see this morning the sunrise, radiant; purple reds and searing turquoise blues, beautiful; filling all the length plus, of the Eastern horizon. What does it portent? Rain?, or is it just a reflection of the damage we have done to God’s creation? The pollution and particulates we have chugged into the atmosphere micro bending the acute rays of this rising sun? Most shallow pious will rejoice at the beauty of it and be mindless of the danger of which it warns. WE Cant give up a big gas guzzling non work truck, a house stuffed with mass produced shit more than one could ever use or give away our blessings to help those less well fortuned, or be charitable to those who hate us. Anyone can love those who love them (Jesus said this). “What is the most important commandment?”, asked the young man.

Trump from the beginning has shown himself to be craven, hostile, vain, unapologetic, and uncaring. But hell he is a white guy with a lot of money. I think this contrasts starkly from the teachings of our Savior not our ‘helper’ (He has basically pulled my unholy fat out of life’s fire more times than I can count;-)!!!) You know that Jesus guy, some of us claim to love so dearly.

Do I think this is all in God’s hands? Yes, and He was there when people in mass were executed in WWII, for one just one example, when ‘good’ men did nothing. “Am I my brothers keeper?” said Cain. God’s on my side, “What me worry?”, Alfred E. Newman.

So as a liberal, same sex supporting, weird art making artist, vaping,  drinking, cussing, flagrant boy watcher, (both CK Chesterton and CS Lewis drank and smoked, ONLY God is qualified to judge any of us), Christian; I offer up some scriptures of which I am well versed. I read and study A LOT, sorry ego I have one;-)  Here are some treasured scripture to bolster my heart felt, typed out, words.

Matthew 22:36-40 The Message (MSG)
The Most Important Command
34-36 When the Pharisees heard how he had bested the Sadducees, they gathered their forces for an assault. One of their religion scholars spoke for them, posing a question they hoped would show him up: “Teacher, which command in God’s Law is the most important?”
37-40 Jesus said, “‘Love the Lord your God with all your passion and prayer and intelligence.’ This is the most important, the first on any list. But there is a second to set alongside it: ‘Love others as well as you love yourself.’ These two commands are pegs; everything in God’s Law and the Prophets hangs from them.”
Matthew 7
12 “So whatever you wish that others would do to you, do also to them, for this is the Law and the Prophets.
13 “Enter by the narrow gate. For the gate is wide and the way is easy[a] that leads to destruction, and those who enter by it are many. 14 For the gate is narrow and the way is hard that leads to life, and those who find it are few.

Luke 10:25-37The Message (MSG)
Defining “Neighbor”
25 Just then a religion scholar stood up with a question to test Jesus. “Teacher, what do I need to do to get eternal life?”
26 He answered, “What’s written in God’s Law? How do you interpret it?”
27 He said, “That you love the Lord your God with all your passion and prayer and muscle and intelligence—and that you love your neighbor as well as you do yourself.”
28 “Good answer!” said Jesus. “Do it and you’ll live.”
29 Looking for a loophole, he asked, “And just how would you define ‘neighbor’?”
30-32 Jesus answered by telling a story. “There was once a man traveling from Jerusalem to Jericho. On the way he was attacked by robbers. They took his clothes, beat him up, and went off leaving him half-dead. Luckily, a priest was on his way down the same road, but when he saw him he angled across to the other side. Then a Levite (ex.Conservative Christian interested in worldly power), religious man (ex.You or Me regular church goer ‘good christian’) showed up; he also avoided the injured man.
33-35 “A Samaritan (ex.Some random fundamentalist or mainstream Muslim likely dark skinned and in odd dress aka not jeans and a tee shirt:-) or maybe an atheist with piercings or too many tats, ok fill in your own personal deplorable here….) traveling the road came on him. When he saw the man’s condition, his heart went out to him. He gave him first aid, disinfecting and bandaging his wounds. Then he lifted him onto his donkey, led him to an inn, and made him comfortable. In the morning he took out two silver coins and gave them to the innkeeper, saying, ‘Take good care of him. If it costs any more, put it on my bill—I’ll pay you on my way back.’
36 “What do you think? Which of the three became a neighbor to the man attacked by robbers?”
37 “The one who treated him kindly,” the religion scholar responded.
Jesus said, “Go and do the same.”
The Message (MSG)

Excerpt from my personal journal THREE days before the Election. I updated have expanded and updated it this morning one week later, to reflect that elections results. MCLV2016-11-122016-11-12https://mlvaught.com/wp-content/uploads/2016/02/NameWithHead.pngMartha Lindenborg Vaughthttps://mlvaught.com/wp-content/uploads/2016/02/NameWithHead.png200px200px 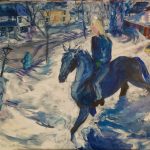