My half-bro Carl died when I was 19. He was a combat Marine in Viet Nam and saw heavy ‘action’. Carl’s mom died when he was just a year old and she drank when pregnant with him. It left him damaged. He got into the Marines after stealing a car and driving to California. Our uncle knew a state Cali senator and got Carl out of a Fed charge Grand Theft (Auto) and into hell. He served in 69-70, Da Nang. He came back even more destroyed by the Fates. In and out of jail violent drug and alcohol addicted. Spent last 2 years of life in Jail and Central State. Suffered from PTSD and Malaria and fetal alcohol syndrome. He worked as a carpenter. We all worked on our house/cars and hundreds of other shitville repair project around our Indy home and other locals. He loved to bullshit, fish, drink shoot skeet, make things. I was close to him because we had the same sorta hand’s on approach to life. He was a scary character and uncontrolled much of the time, but that was fated to him in the womb. He died when I was nineteen in Sept 1981 on my parent’s anniversary. I took the call from my Aunt who found him. He had choked to death on his own vomit after drinking on antabuse. That anti drink drug had been proscribed to him by the VA. He died alone during the night. When my Aunt found him he was cold and blue and laying in the closet. I drove my Dad up to my Aunt’s and the cops and medic would not let us see his body. I saw it wheeled out under a sheet. It took the corner, Dr Manders, 5 months to render a verdict on cause of death. My dad called their office every damn day. 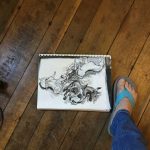 Troller IN Chief Rules, Word Images for We (you and I), Getting the Troll-ingDrawings, Ink Wash, New Work updates